Home » The Story of the Easter Brothers »

The Story of the Easter Brothers

Russell, James, and Ed Easter were born and raised in Mt. Airy, NC in the early 1930s. Russell began playing the guitar and taught the others to play when they were young. 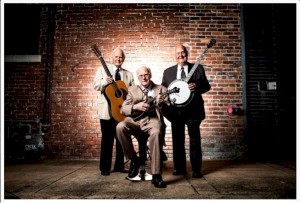 Learn How it all started, and why they are as vibrant as ever, even after more than 60 years on the Gospel Show circuit.

The early gospel group, formed in Danville VA, where Russell and Ed had moved to work in Dan River Cotton Mill around 1951, was called The Easter Brothers and the Green Valley Quartet. This group also included several other relatives and Allen Mills (currently of Lost and Found) who played bass.

In 1959-60, the brothers were signed to the King Record label and recorded several 45’s including the Darkest Hour and Bible on the Table. Sid Nathan, the president of King Records called the 3 brothers into his office and asked if they would consider singing country “love songs.” Their reply was, “We’re already singing the greatest love songs of all.”

Various musicians came and went through the next several years, but the 3 part harmony of the Easter Brothers remained the same.

Russell’s youngest son, Roger began playing drums and occasionally bass for the group. Russell’s daughter, Linda, also performed solo songs on two of the projects in the 1960s. During this time, two of James’ sons, Jeff and Steve Easter, also joined the group playing various instruments. Jeff Easter also recorded solos on different albums and projects. During the ’60s and ’70s, two of Ed’s sons, Eddie and Bobby, joined the group. Russell’s grandson, Jason, and James’ grandson, Josh also played with the group for a period. The younger generation became known as the Easter Bunnies.

As the younger generation grew older, a few of them began playing with other groups such as the Lefevres and the Happy Goodmans. Russell Jr. and Steve Easter became staff musicians at gospel music recording studios.

The Easter Brothers collectively have written over 300 songs which include gospel greats such as “They’re Holding Up the Ladder” and “Thank You Lord for Your Blessings on Me,” both of which have won Dove Awards (2002 and 2009). The Easter Brothers’ songs have been recorded by many other groups in the gospel music industry. The artists who have recorded songs written by members of the Easter Brothers include the Primitive Quartet, the Happy Goodmans, the Dixie Melody Boys, the Dixie Echoes, and the LeFevres.